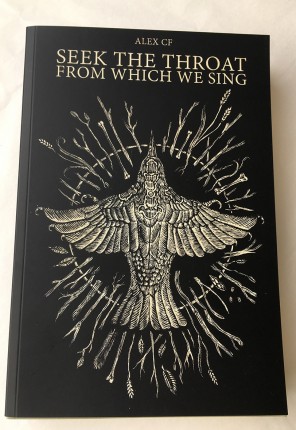 'Seek The Throat From Which We sing' is the first novel by Alex CF.
Dark animal mythology / environmental fantasy book in the tradition of Rats of NIMH, Duncton Wood, and Watership Down.

Brief description:
The Thousand headed king is dethroned. The prophet Grom has left his son under the tutelage of his kin, whilst he searches for answers amongst his unquenchable grief. Rune knows only of the Startle and their glorious murmurations above the Pinnacle, and of his hatred for the murderous Gull king Esperer; a hatred that will lead him to exile.
He is cast into a land once ruled by the Wroth, whose machinations have stained the world black. But the Wroth are dying, and in the wake of their demise, many species vie for their crown. The Orata, the spoken scripture of the Vulpus speaks of a time when the sovereignty will fall upon them. Yet for this to come to pass, they will need an Umbra; the rarest of clairvoyants, and they have placed their hope upon Rune.
There are others who seek him too; the Corva Anx and their dark incantations and the vicious and determined Morwih. Yet Rune believes his father is still alive, beyond the lithe forests and effulgent oceans, at the cusp of reality, the ancient and enigmatic source of the Umbra.
Seek The Throat From Which We Sing is a visceral tale of animal mythology, of dark and foreboding rite and ritual and the desperate rasp of life.'