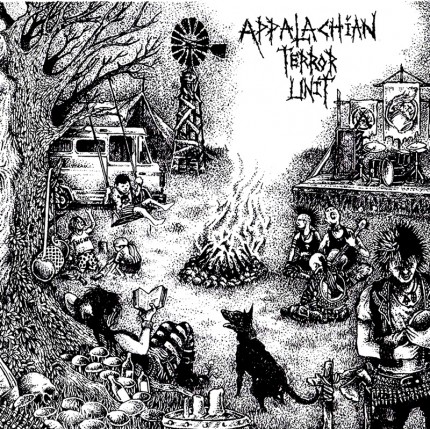 "We Don’t Need Them" is the second full-length record from West Virginia punx Appalachian Terror Unit. ATU have become known throughout the years as being one of the most politically charged bands in the current punk scene. This new record is an all out attack on today’s society that takes ATU to a new level of intensity both lyrically and musically. The combination of the beautiful and thought provoking gatefold cover (with art designed by Stiv of War) along with the brilliant recording and mastering job by Jay Matheson at the Jam Room take this record even further. Song subjects include the horrors of war, police brutality, destruction of the environment, rape culture, consumerism and much more. Expect a very heavy and much angrier approach from a band that has been around the block and matured their sound. Seven raging new tunes including the epic fourteen and a half minute track “We Don’t Need Them”, a song that will one day be ranked among similar greats as the SUBHUMANS “From the Cradle to the Grave” and AUS ROTTEN “And Now Back to Our Programming