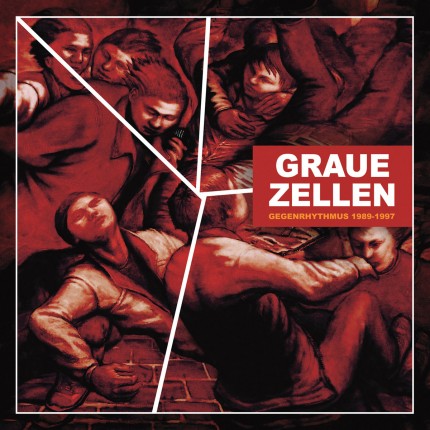 Related links to "Graue Zellen „Gegenrhythmus 1989-1997“ 2xLP"
Description
Description
Graue Zellen from Rendsburg and Hamburg were one of the most important German... more
Close menu

Graue Zellen from Rendsburg and Hamburg were one of the most important German hardcore-punk-bands in the 1990s. Starting in 1989, they split up in 2001. Graue Zellen did three LPs, a split-LP with Ναυτία from Greece (Skuld Releases, 1994), two EPs, a demo-tape and several songs for compilations. This double-lp collects the EPs „Hunger nach Leben“ (1990) and „Keiner weiß wohin“ (1993), most of the split-lp with Ναυτία, the cover-songs „Grüne Wände“ (So much hate), „Out of step“ (Minor Threat), „Automat“ (Terveet Kädet) and several unreleased songs from 1989-1997. Graue Zellen were popular for their energetic, raging liveshows and their radical political positions between antifascism, squats and the struggles of the 1990s in Germany and Europe. The band will be back on stage in 2019 as „Zellen“, new songs are in work. Counterculture at it`s best! „Gegenrhythmus“ was complete remastered in Demolition Room Studio (Smoke Blow), comes in a thick gatefold-cover with beautiful historical artwork, textposter and downloadcode.