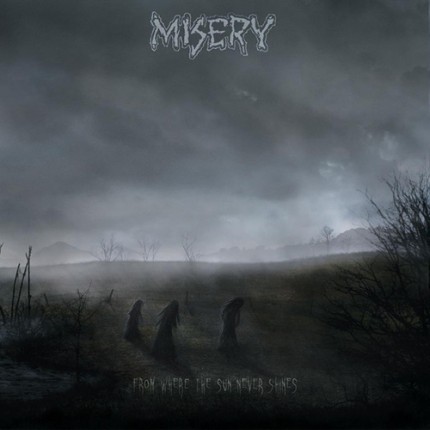 Reissue of this crucial crust-punk semi classic from 2012. Originally released by Inimicial Records in just a very limited first press, this masterpiece finally gets a re-release thanks to Flox and FFYM Records.
MISERY don't really need an introduction do they? Along with NAUSEA and APOCALYPSE they spearheaded the American crust-punk scene since the late eighties and here they are to unleash 14 tracks of frantic bulldozer crust punk including two covers from the AMEBIX and NEW MODEL ARMY.
MISERY having been prophesizing the end times while blasting our ears for the last 25 years now. 25 years and only three full-lengths. For many bands, after such a huge gap between releases (it’s been 9 years since their somewhat lacklustre splits with TOXIC NARCOTIC and PATH OF DESTRUCTION; 16 years since the now-legendary “Who’s the Fool… The Fool is Silence” LP), the original spark isn’t there anymore, or the band merely splits up. Thankfully, neither of these are the case with MISERY. In fact, it is safe to say that this is the best thing the band has recorded in their entire history, and this seems to be the start of a whole new exciting chapter for the band.
Mastered and Re-mastered by Jack Control of Enormous Door Mastering.
Gatefold-Artwork by Andy Lefton and the repress includes a DIN A1 Poster with additional artwork by Brian D'Agosta aka. GOST ART.
Also included is a reworked lyric sheet with photos by Christine Boards Larson (Slug & Lettuce) and Alicia Morgan.