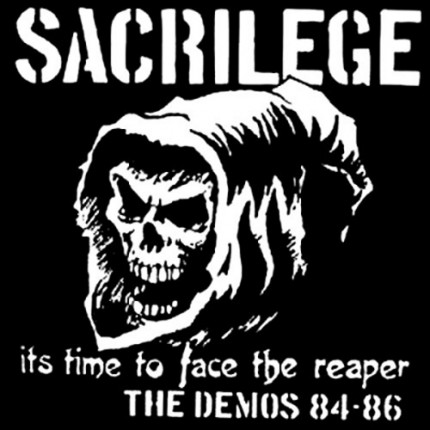 USA-Import!!! Sacrilege emerged from the UK hardcore scene in the mid 80's. Featuring ex members of Warwound and Varukers, Sacrilege took the UK hardcore sounds of the day (Discharge, Varukers, Icons of Filth, Antisect) and mixed in a combination of powerful thrash and metal. The resulting mix was a high energy metal/hardcore hybrid which quickly stood apart from many of the other bands mixing punk and metal at the time. Sacrilege had the killer combination of epic metal songwriting with Tam's scorching female vocals and the power, passion and intensity of hardcore punk. This double LP compiles all four of the bands demos. The early demos lean much more towards hardcore punk, while the later demos show the metal influence coming in stronger. While a lot of bands who mixed punk with metal didn't have the songwriting ability or talent to write memorable metal songs, Sacrilege were equally adept at playing fierce thrash and heavy, driving metal. This double LP was released with full co operation of the band, remastered for vinyl, with a fold out poster sleeve featuring original artwork from the 80's and photos and flyers rarely, or never before published.