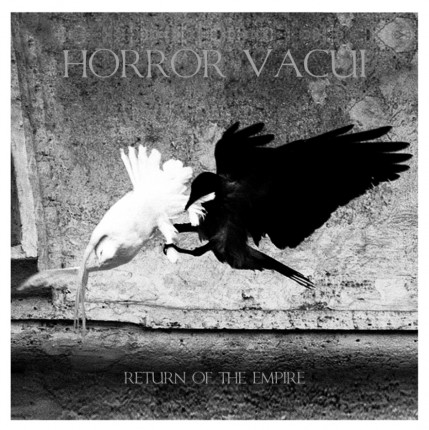 Related links to "Horror Vacui - Return Of The Empire LP"
Description
Description
This album is the long awaited follow up to their debut "In Darkness You Will Feel Alright".... more
Close menu

This album is the long awaited follow up to their debut "In Darkness You Will Feel Alright". Holy Sisters of Mercy! Horror Vacui are from Bologna, Italy, and this newer LP is much more gothic rock in sound than a lot of their previous stuff. There are still some fairly uptempo tracks on the LP (like “The Right Cure” and “Time”) but the LP as a whole is mainly mid-tempo, guitar-heavy trad gothic rock. There are still some other influences at play — for example, Track 4, “Time,” sounds like it really wants to be TSOL’s “Dance With Me” — but it’s mostly the old Leeds UK goth bands and their contemporaries, like Terminal Gods, that seem to figure largely in Horror Vacui’s sonic output here. That’s not a bad, thing though: Horror Vacui’s LP is one of the best representations of that genre, and the political bent of the band keep it from becoming another meaningless, self-indulgent goth wank fest. The band is careful to hold onto their DIY punk roots.