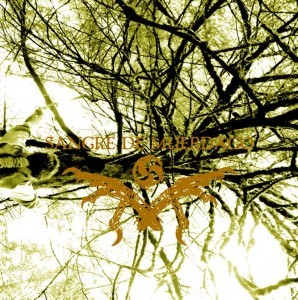 Related links to "Sangre De Muerdago - s/t LP"
Description
Description
Iconoclast leaves out for a while the extreme sounds and opens the gates to the whispers of the... more
Close menu

Iconoclast leaves out for a while the extreme sounds and opens the gates to the whispers of the Galician forests and the raging waves of the ocean crushing against the cliffs. Sangre de Muerdago is the brainchild of Pablo, creative musician previously known to have been part of many crust bands such as Ekkaia, Leadershit, Cop on Fire and nowadays drummer for Ursus, born from the need to abandon the civilized world and rediscover the traditional sounds of his lands, whose origins are lost in the distant past of the Celtic culture. Echoes of some nordic folk (it’s impossible not to refer to ULVER’s Kveldssanger) blended with traditional Galician music come out from these nine songs; In fact, many traditional instruments join the classical guitar and the twelve-string guitar, perfectly sealing the runic power hidden on the trees of those uncontaminated lands.