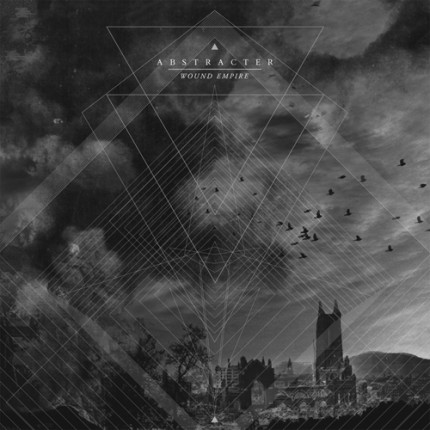 With the threat of apocalypse constantly looming over humanity, Oakland-based Abstracter supplies an apt soundtrack for the end of times, as they’ll prove once again on the quartet’s impending sophomore full-length "Wound Empire". Centered once again on the construction of lengthy, winding, and abyssal buildup and collapse progressions "Wound Empire" brings entirely new elements to the sonic palette of Abstracter and of their massive and enveloping riffing, which is seemingly driven by an almost insatiable darkness and by a sinister and primordial hunger for complete annihilation. From the first disheartening notes of opening blackened sludge crusher, “Lightless,” it is in fact immediately clear that what is about to unravel on the listener is an almost absurd rampage of total obliteration. For forty-two minutes of uncontrolled hostility, Abstracter rips through four titanic ten minute-long surges of darkness-fueled anger, unleashing an almost unbearable barrage of sonic devastation on the listener and snaking and winding their way down a path of complete and dismal destruction in which crust, doom metal, sludge, black metal, noise and psychedelia twist and collide into a daunting sonic downfall. Wound Empire was recorded and mixed last summer at Earhammer Studios in Oakland, California by Greg “The Wizard of Doom” Wilkinson (Brainoil, Pallbearer, Atriarch, Noothgrush, etc.) and mastered at Audiosiege Mastering studios in Portland, Oregon by Brad Boatright (Wolves In The Throne Room, Nails, Sunn O))), Sleep etc.). The album is undoubtedly a release to look out for in the underground realms of all things heavy and dark, and is a must for fans of Altar of Plagues, Inter Arma, Thou, Samothrace, Amenra, Tragedy, Indian, Wolvhammer, Unearthly Trance and such.