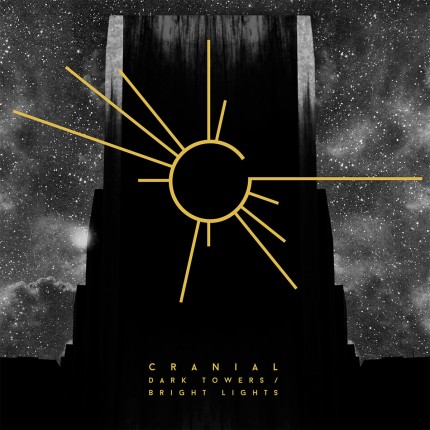 After arising from the ashes of the post-metal heavyweight Omega Massif in 2014, Cranial are now about to release their first longplayer „Dark Towers, Bright Lights“ that combines 45 minutes of thick and heavy sludge and doom.
When the four members of Omega Massif split up, their musical future was vague but soon Phantom Winter, Blacksmoker and lastly Cranial came to life. For the latter, Omega Massif‘s Michael Melchers (guitar) gathered Julian Weidhaus (bass and vocals), Cornelius Merlin (drums) and Sebastian Kröckel (guitar and vocals) to work on the fi rst material which was later recorded by Tobias Anderko in his Blank Disc Studio. The two songs were mixed and mastered in the Tonmeisterei in Oldenburg and later released as the band‘s first physical release. The „Dead Ends“ EP came out in the end of 2015 via Moment of Collapse Records on CD and tape, while the vinyl version‘s appearance was enhanced with a screenprint on the B-side, a printed innersleeve and an inside out cover with a die-cut logo.
The EP was highly praised by the international press which enabled the band to play the Droneburg-Festival among several other festivals and shows. In the summer of 2016, Cranial then booked the Tonmeisterei for a week to record the EP‘s successor „Dark Towers, Bright Lights“ with Role Wiegener. Similar to the „Dead Ends“ EP the four songs on „Dark Towers / Bright Lights“ are gloomy, heavy and abundant with a threatening atmosphere. When there is a leitmotif on Cranial‘s latest release, then it is a muddy and bloody plow that draws relentlessly through everything that gets in its way! This beast of an album leads the listener through an almost cinematic dramaturgy by stacking soundscape on soundscape. In the face of these sonic monliths, the tension becomes almost unbearable. Only then Cranial crush them to ruins just to repeat the procedure. Again and again with no time for relaxation. With that „Dark Towers / Bright Lights“ is highly recommendable for fans of Neurosis, Isis, Cult of Luna and the likes.