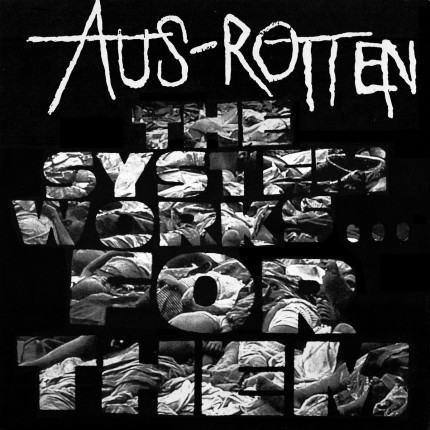 USA-IMPORT!!!! Finally Re-issued after 20 years! - Originally pressed in 1996 PROFANE EXISTENCE is bringing this quintessential anarcho-punk masterpiece back in circulation.

In 1996 AUS-ROTTEN released their first LP “The System Works For Them” on an unsuspecting punk scene. It spread like wildfire in a pre internet era within a genre that mostly depended on tape trading. (at least is was pre internet for us penniless punks) “The System Works For Them” was the perfect mix of anger and intelligence that the scene needed at the time (and still does today). It was like a wake up call that opened the eyes and ears to many punks the world over. The messages where crystal clear and most us were hooked as soon as the beginning shouts of “Boycott” bellowed over the speakers. I don’t believe any of us ever expected their message to resonate so well within the scene, but even more surprising is how the songs are just as relevant today as on they the day they were written. Which is why PROFANE EXISTENCE has decided to repress this record. We feel that that messages that AUS-ROTTEN brought to the table are to powerful to ignore. We feel that this LP is important and therefore should be highly available and priced affordably. We feel that those that would charge over exorbitant prices on eBay or Discogs have forgotten the message.

PROFANE EXISTENCE has worked this out to ever last detail of this release with the members of AUS-ROTTEN whom have been involved from step one. All tracks have been re-masted by Jay Matherson at the Jamroom studios. To be 100% honest we didn’t want to do a complete re-master of what we already considered a good recording. However when we opened the tracks on protools we noticed a few balance issues that required fixing. These fixes resulted in a tremendous upgrade to the overall quality of the tracks. We painstakingly scanned, puzzled, and photoshopped the original artwork to make sure that it was as close to authentic as it could possible be. We then went for broke by pressing in three different vinyl color combinations! Overall to say that we are pumped to release this would be an understatement, we are absolutely ecstatic to bring you this LP on PROFANE EXISTENCE!