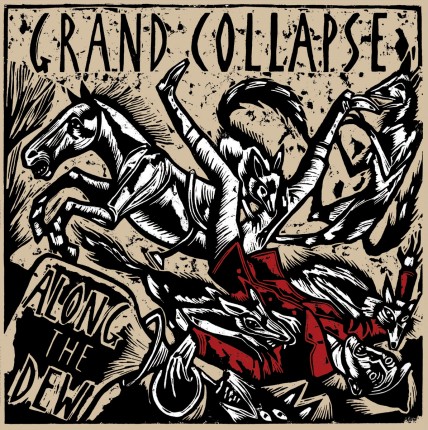 Related links to "Grand Collapse - Along The Dew LP"
Description
Description
We are incredibly excited to bring you the second album from Cardiff’s hardcore punks GRAND... more
Close menu

We are incredibly excited to bring you the second album from Cardiff’s hardcore punks GRAND COLLAPSE. ‘Along The Dew’ does not disappoint and perfectly follows on from the bands frantic 2014 debut ‘Far From The Callous Crowd’. The new album ‘Along The Dew’ delivers everything you want from GRAND COLLAPSE; it’s an aggressive, non-stop full throttle forward beast of raw energy and massive riffs! This is a joint release with TNS Records and URINAL VINYL from the UK. This is what the band have to say about the album. “We’ve spent the last three years touring the Far From The Callous Crowd record to death so at the beginning of 2016 we thought it about time we cracked on with making a new album. Writing and performing new songs was a breath of fresh air and we were excited to capture it in the studio. On reflection I think this album is more chaotic and aggressive than the first. It has a lot of energy, a ton of riffs and is unrelenting in pace. Topically I’ve covered the DSEI arms fair, our trial against the UKBA, the convenient death of Luciano Ponzetto & the harrowing nature of domestic abuse. The title track, Along the Dew, is a fictional short story about a fallen huntsman struggling through the wintry earth and being chewed by woodland creatures. Happy stuff like that. We’re really happy with this effort, which is saying something because we’re a bunch of pedantic bastards when it comes to this stuff.” As with their debut album, the artwork is a woodcut print made by the amazing artist John Abell. To find out more about him, head to his website. (http://johnabell.blogspot.de/) Produced & mixed by Lewis Johns at The Ranch Production House (UK).
Mastered by Broad Boatright at Audiosiege (Portland, U.S.A).
Guest vocals on 'Though Bloodshot & Blurry' by Efa Supertramp.
Graphics and layout by Welly Artcore. Photograph by Boo.
Cover art by John Abell.