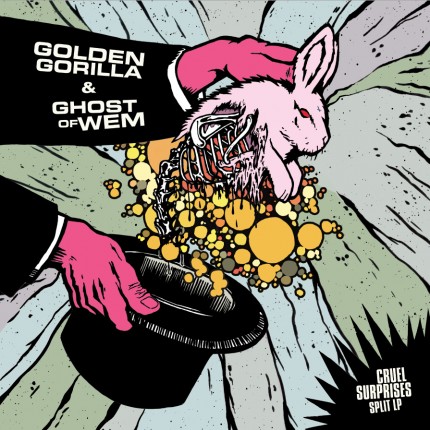 "cruel surprises" is a sick, ingenious and undeniably heavy split record from 2 fine bands from Germany. GOLDEN GORILLA, who reformed recently, offers 4 tracks while GHOST OF WEM delivers 2 tracks. This is a 36min. journey of heavy sludge to awaken your senses and rattle your bones. Up 1st are the veterans from GOLDEN GORILLA. They're stuck knee deep in the dirty swamps of ultra (s)low, mean and extreme heavy sludge, with heavy riffs, unhealthy like the Louisianan midday sun, nihilistic whirls of pain and depression, that has been cultivated by EYEHATEGOD, IRON MONKEY and GRIEF and their many disciples. The sound is crisp, harsh and painfully defined, yet unpolished and raw as fuck it mercilessly keeps dripping down on you. GOLDEN GORILLA is an over-the-top assault that reeks of cheap bear, spilt bong water, and simmering, burning rage. On the flipside GHOST OF WEM (including BLACK SHAPE OF NEXUS members) show yet again their mixture of slow-paced, down-tempo and blackened sludge-metal, in the vein of THOU, MOLOCH and LOSS. Both tracks running for around 10min. each and take no prisoner. Their 2nd track blends drone, doom, sludge and black-metal for a more experimental feel compared to the previous track. It's probably the heaviest and loudest track on the split and it ends the record on a bleak depressing note. GHOST OF WEM will crush your skull with their thick, distinct formula and atmosphere that contain a refreshing black-metal and progressive-hardcore breeze. The album is very well produced, but not overproduced. Everything is clearly audible and everything has it's own space. Overall, this is an excellent split-record from 2 great bands and an essential listening for sludge fans. Colored vinyl comes with outstanding artwork, lyricsheet and includes a digital download card...remember, in the immortal words of the Beastie Boys: “let it flow…let yourself go…slow and low…that is the tempo”!