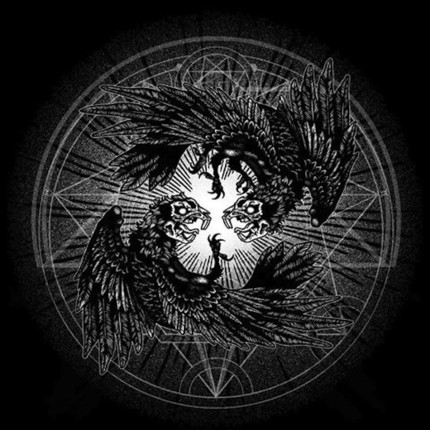 "The split album by the sludge bands Cult Of Occult and Grim Van Doom starkly contrast the two very different approaches that the two bands bring to the same genre. But, if anything, that contrast grabs the listener. Cult Of Occult’s half of the album is one, twenty-two minute long track titled “Black Sea”. It rumbles like a distant demon patiently clawing its way out from hell, one massive handful of earth at a time. Plump, earthy bass tones, ominous, cymbal-heavy drumming, hellishly guttural vocals and filthy guitar distortion are set to a tempo that makes Sleep look like a grindcore band. All of these elements remain constant throughout the twenty-two minutes of “Black Sea”, giving the song an endless, trance-inducing feel.
The half of the album given to German quarter Grim Van Doom is rather different. Containing three songs and a brief interlude, Grim Van Doom’s side of the album is like a punch in the face from a spiked, steel gauntlet. While all three song’s on Grim Van Doom’s side of the album cross over the five minute mark, there is still a feeling of very little fat on them; they are all lean, brutish works of harsh sludge that churn your stomach and make the marrow of your bones tremble. Pungent tones grate against your eardrums as they doll out riffs that sound as if they had been written by someone who had spent the last two decades fuming at past transgressions and plotting revenge.
Having the music of these two different bands stacked side by side is an effective way of exaggerating the qualities of both. Both Cult Of Occult and Grim Van Doom create music that is firmly within the sludge metal sphere, so there is enough similarity for coherence. However, while each band grabs sludge by the throat, they do so from disparate angels. Cult Of Occult’s slithering journey through the abyss brings out the pounding, martial energy of Grim Van Doom, who in turn make the hellish sounds Cult Of Occult that much more vivid." ( the sludgelord )