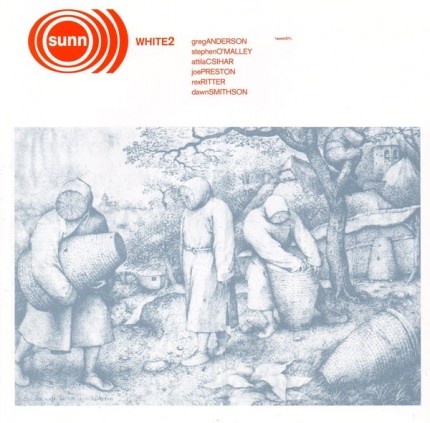 SUNN O))) co-founders Stephen O’Malley & Greg Anderson originally conceived the WHITE albums to be “acoustic” but the sessions at Fontanelle’s Magnetic Park studios in Portland Oregon quickly took a far different route toward the psychedelic and the electronic/synthetic, with trance and drone experiments.
The WHITE2 album was notably the first collaboration with the Hungarian legend & singer Attila Csihar, which has since begat a long and fruitful creative story of the O))) ethos. With the WHITE albums SUNN O))) took a bold step the experimental and highly collaborative path the concept of the group has traveled since. Together with Attila, WHITE2 featured the extraordinary talents of special guests Joe Preston, Rex Ritter & Dawn Smithson. Along with WHITE1, the album brought the concept of SUNN O))) forth from the shadows of the earth unto the broader cosmos spheres, arriving at a truly transcendent note with the pairing of the “DECAY” tracks featuring Attila. And, the sky cracked open.
For these reissues SUNN O))) returned to the original full length unedited premasters/final mixes and brought them to Matt “The Alchemist” Colton at Alchemy Mastering in London for a complete high resolution 88K/24bit mastering and, crucially, cut the lacquers using Alchemy’s half-speed method on their Neumann SX 74 cutterhead. The outstanding results allow the original full length mixes to be pressed at high fidelity on the vinyl format.
The new WHITE2 masters reveal a broader frequency response, the bottom end is deeper and more intense, low mids are lusher, high frequencies are smoother and the stereo image is vastly improved, seeming more 3 dimensional spacially and more dynamic. The sound is clearer, sharper, more direct.

Southern Lord Recordings is pleased to present the historical SUNN O))) WHITE albums in their fundamental and proper forms.