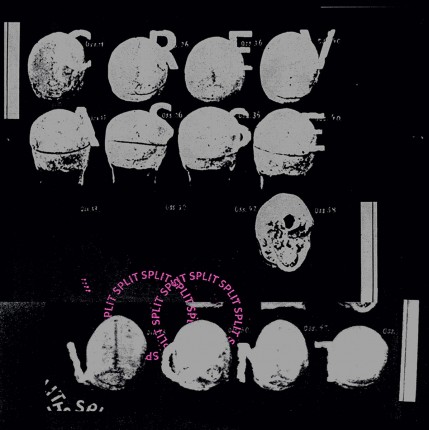 Weiterführende Links zu "Crevasse / Vont - Split LP"
Beschreibung
Beschreibung
They may seem like an unusual choice of bands to be featured on the same record, but somehow it... mehr
Menü schließen

They may seem like an unusual choice of bands to be featured on the same record, but somehow it makes complete sense. Crevasse and V0NT go way back, and so both bands knew sooner or later they would collaborate in some way. Although Crevasse could be described as a punk band, and V0NT as an electronic act, samples, noise, and aggressive vocals can be heard on both sides of this record, making it a coherent whole.
V0NT is a three-piece from Prague, Czech Republic. They build their songs using hardware samples, synths, and noisy effects. On this record V0NT delivers two blackened electronic songs which combine punchy post-EBM beats, heavy synths, walls of noise, and angry distorted vocals. Lyrically, they deal with the dark side of human behavior – fear, anxiety, prejudice, and death. While V0NT is a purely electronic band, their members also play in hardcore, punk, and metal bands like Marnost, Gattaca, and/or Remek. You can even find sample cuts of Axegrinder, and The Mob tracks hidden in their songs.
Crevasse's follow-up to their split with Cloud Rat is a bizarre twelve minute collage of noise, repetitive beats, and nerve-wrecking tension. The band took a new turn with this release and moved away from their hardcore punk roots. None of their fast-paced, d-beat driven songs can be heard on Addendum. Instead, this rather atmospheric and noisy track is full of repetition, layers, and samples (some of which made by V0NT as well).