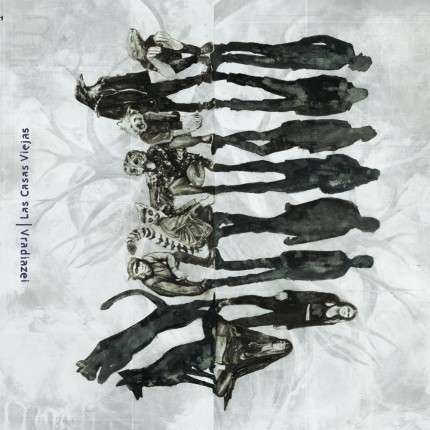 This release is a collaboration between the Portland/Olympia based DarkFolk band Vradiazei and the spread all over Europe music collective Las Casas Viejas. The whole record is chracterized by mostly unplugged instruments, quiet and intimate sounds creating a mystical experience.
Las Casas Viejas: We´d like to share two songs „Während des Tages“ and „...... und während der Nacht“ (During the day ...... and during the night) on this Split Record. These two songs are connected musically and in content, telling the story of experiencing a period of 24 hours using various instruments such as: organ, a microtonal tuned piano played with eight electro magnets, e-bows, percussion, micro tonal tuned hammered dulcimer and xyleophone next to guitars, bass drums and vocals. „Während desTages“ was recorded live at a friends house in the Austrian Alps, „...und während der Nacht“ was recorded a couple of weeks later at East End Studio in Berlin.
Vradiazei: The tracks we are sharing on this release form a bridge from our earlier work to the present. Falling Water was recorded in a living room in 2013 in Olympia while Christine and Lilia were still fully in the band. It is the last song we wrote with that lineup and is previously unreleased. In 2016 we became a two piece and Ximeronei and Nychtonei emerged as our first compositions while we adjusted to our new configuration. We recorded these during winter 2019 in Olympia at a recording studio called the Owl Lodge. They can be considered two movements of the same piece, with Ximeronei representing new beginnings and Nychtonei, the inevitable end.