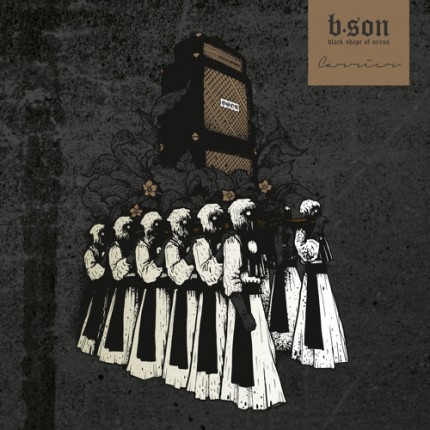 Weiterführende Links zu "Black Shape Of Nexus - Carrier 2xLP"
Beschreibung
Beschreibung
The only constant is the blackness of the shape. Everything else, including the shape itself, is... mehr
Menü schließen

The only constant is the blackness of the shape. Everything else, including the shape itself, is in a constant state of flux for Black Shape Of Nexus. From the very beginning, in 2007, when they released their crushing, suffocating self-titled debut, it was very clear already that some very dark and menacing clouds were gathering over Mannheim, in south-western Germany. Their first live shows confirmed the worst, as audience after terrified audience left each successive gig with a feeling of dread and unease, not to mention severe neck pains. The next release, ‘Microbarome Meetings’, wasn’t so much a step but a running jump with both feet into left-field, a limited-edition display of horrific drone, showing this sextet can pummel your mind into nothingness in a variety of ways, most of which were combined on their ‘Negative Black’ masterpiece, which saw the light (but very little of it) in 2012. A monument of heaviness and harshness, it went far beyond doom or drone or noise or post-anything, beyond genres and categorizations, as if pulled through a black hole and coming out as something unspeakable on the other side. Now, after a compilation that only highlighted how essential B-SON’s adventurous, meandering black sonic miasma has been throughout the years – ironically called ‘Nothing New’, because taking yourself too seriously is stupid – they return with a new beast called ‘Carrier’. It is a monster record, where the band ventures out further than they ever have before, drenching the songs in atmosphere, aggression and/or even speed, occasionally (or lack thereof, mostly, don’t worry), through a tour de force that will exhaust all but the completely deaf. Which we’re all just a little closer to be after each listen. The album cover is self-explanatory and it reveals the one true master that has always been behind Black Shape Of Nexus in each and every colossal song they drop on us – sound, as it emanates loudly and thickly from a stack of amps, louder and louder each time until your brain is finally reshaped.