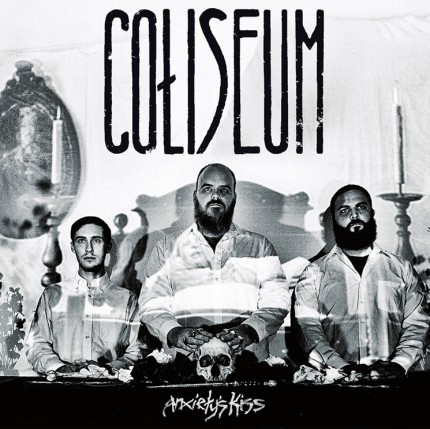 Founded by Louisville musician Ryan Patterson and including Kayhan Vaziri and Carter Wilson, power trio Coliseum have grown to become one of today's quintessential contemporary punk bands. Successfully melding progressive musicianship, hardcore fervor, and vital social awareness into one constantly evolving artistic vision. Over the last decade Coliseum have released music on a host of labels including; Temporary Residence, Relapse, Level Plane, Auxiliary (Ryan’s own label), and Deathwish. “Anxiety’s Kiss” is the new album from Coliseum, recorded at The Magpie Cage by producer/engineer J. Robbins (Jawbox, Burning Airlines). “Anxiety’s Kiss” is a hook-laden maturation of the Coliseum sound. Nods to their early D-Beat leanings are there, but it is their willingness to embrace Post-Punk melody and explore the space between notes that make “Anxiety’s Kiss” so alluring. Confidently growing within the punk world, without ever leaving it behind. “We Are The Water” kicks things off with a synth-driven stomp while lyrically serving as a poignant social awakening and call for human empathy. Amidst a tangle and twang of melody, “Course Correction” and “Wrong/Goodbye” then emerge to tackle the ripe subjects of class division and police brutality. “Drums & Amplifiers” picks up pace, taking on those who reflect on their punk past rather than absorb the spirit that still charges the air around us. It’s not all social and subcultural commentary though. The dizzying “Dark Light Of Seduction” and sultry “Sharp Fangs, Pale Flesh” (where J. Robbins guests performing the BulBul Tarang) are darkly provocative narratives about the power of lust and love. In soul and tone, they both interject an emotional underbelly to it all. Robbins also adds bass on “Comedown”, an industrial-tinged romp led by Vaziri’s baritone guitar and Wilson’s booming toms. Coincidentally, it is also the first Coliseum song ever recorded to not feature Patterson on guitar. “Sunlight in a Snowstorm” is the band at their most melodic, with a snow-covered New York City as its lyrical backdrop. The high beam lit, cinematic noir of “Driver at Dusk” and infectious, fuzzed-out “Escape Yr Skull” lastly descend to close out the album. A flawless, yin and yang pairing that is Coliseum at the peak of their experimental and anthemic powers.