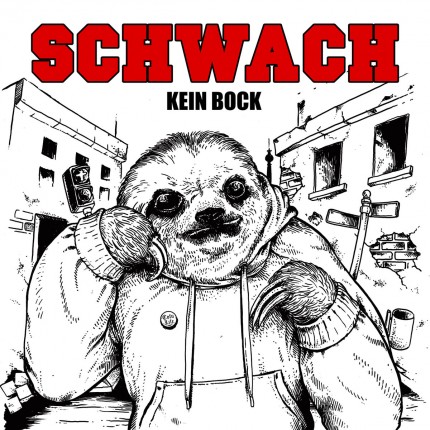 Weiterführende Links zu "Schwach - Kein Bock LP"
Beschreibung
Beschreibung
Schwach is political Youth-Crew-German-Punk from Berlin. They put out a Demotape and a 7“ and... mehr
Menü schließen

Schwach is political Youth-Crew-German-Punk from Berlin. They put out a Demotape and a 7“ and now they‘re going to release their Debut-Album. The four guys met eachother at work in a Fast Food restaurant and decided to create a band while making fries. „Kein Bock“ means you don‘t want to do something, don‘t want to invest any energy into it – basically you don‘t give a shit. The lyrics are in German (with English descriptions). They deal with things such as being a person in a neoliberalist society, the production of palm oil, being against work and for a class war and personal stuff like friendship or how cool it is to skate.You can hear that the guys like traditional Youth-Crew, like Reaching Forward or Mindset but also have classic German Punk bands like ...But Alive or Slime in their record collection. Political! Powerful! Lovable! Get into it!