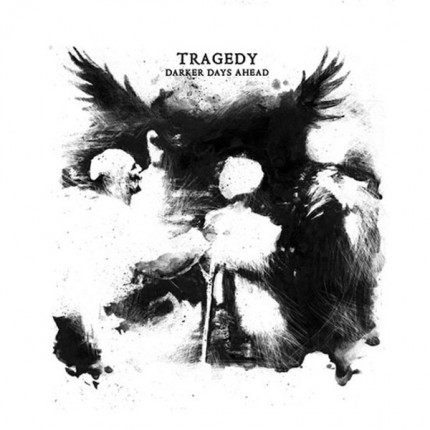 Tragedy’s third album and magnum opus Nerve Damage really was a culmination of everything they had been working towards up to that point. What do you even do after dropping such a devastatingly awesome career defining classic? Surely they could not have continued in the same vein and matched Nerve Damage. Tragedy probably recognized this and decided it was time to change gears. While still retaining a crust aesthetic, Darker Days Ahead is their metal album. They specifically go for a sludge sound, and end up with an album that proves to be a worthwhile follow up to what is easily one of the greatest crust albums of the 21st century.
Darker Days Ahead starts off ridiculously strong. “No Cemeteries Here” is perhaps the best straight up sludge song of the album, reveling in gloom and despair. “Close At Hand” is a bit closer to their older work. It has biting crust riffage and perhaps the album’s best melodic section. It’s also a standout for the rhythm section. The way the bass dances its way across sonic territory at the start is mesmerizing and the way that Paul builds tension with a flurry of tom hits show he’s one of the best drummers in the crust game (and he also proves he can adapt to slower tempos quite deftly). The next assault “The Grim Infinite” shows that Darker Days is a metal album riffwise not just for the sludge component. The song largely relies on a stomping mid-paced thrash riff taken right out of the Amebix playbook. This is their thrashiest album in general, even if the chug riffs are slower than you’d expect from thrash (once again, hi Amebix!). Darker Days isn’t simply front loaded – it’s great all the way through. The groggy title track burns slow as a lament for the short-sightedness that often plagues modern society. It features some of their best song writing and the subtle melodic buildups to the chorus prove they are masters of sequencing.
While Darker Days Ahead is without a doubt the biggest wildcard in Tragedy’s discography, it still very much sounds like them. It’s very impressive how successfully they made an album composed nearly entirely of metal riffs still feel like a crust album without going the obvious route of the Amebix sound with a focus on their thrashier riffs. The thick, groggy guitar tone does wonders for the sludge riffs. The gloomy atmospherics really bolster the morose vibe that permeates Darker Days. The vocals are more or less the same cavernous bellows as we’ve come to expect from Tragedy, albeit not as often spewing off at such a rapid-fire pace. As one would expect from the band, the rhythm section is routinely on-point. All in all, there really isn’t anything to criticize.
While Darker Days Ahead doesn’t quite meet the dizzying heights of Nerve Damage, it is an amazing follow up to the best album of their career. Tragedy make a great sludge band and do so while being able to keep their identity intact. Even if they ditch the sludge (as they have done for their latest EP), Darker Days is an amazing detour in their journey and will always remain a highlight of their career.