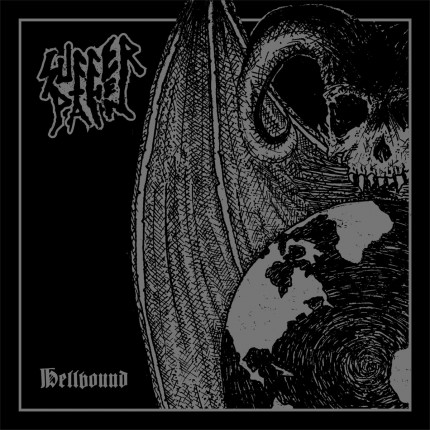 Swedish metallers Suffer The Pain had been riding the EP/Split/Promo/Live album phase for quite a while before releasing their debut Midnight Sacrifice in 2015. This allowed them the opportunity to spew forth a load of material that was pent up in frustration having never had a proper release. As a result, their sound is akin to that of a jet engine bursting into flames after building up unhealthy amounts of pressure. This is crusty, nasty, hellish death metal with that deliciously evil punk influence. You’d think the follow-up to such a blast would be the more mature of the two, but sophomore album Hellbound is an even shorter, sharper shock. Consisting of ten tracks, but only eighteen minutes (eight minutes shorter than Midnight Sacrifice), this 2018 effort is holding nothing back and goes straight for the jugular, sacrificing no points of interest along the way The production quality here is superb. The record retains the raw chaos that typifies early Bathory or Sodom, but feels much thicker; like a cavern being slowly flooded with blood. Stefan’s vocals are particularly elephantine as they bounce off the walls of said cavern. Rather than a blackened shriek (which would also be suitable), he employs a wholesome grunt-cum-bark that is incredibly satisfying, if not entirely comprehensible. Johan’s drums are mixed incredibly well and quickly became my favourite aspect of the album, despite not being particularly dynamic or flamboyant. Among the thrash-beats and blast-beats, the sticksman throws in a couple of curveballs like the pounding opening of “Predator”. It’s also refreshing to be presented with an album of this style which has the bass so prominent.