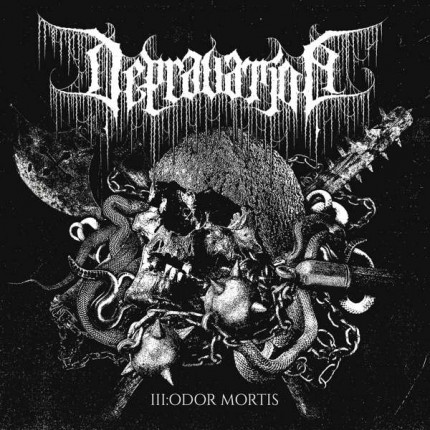 The quartet from Hesse, Germany starts off with a raw, powerful sound. The roots of DEPRAVATION lie between crust, sludge and hardcore. You can still feel and hear that today. The LIFEFORCE RECORDS debut "III: ODOR MORTIS" presents a band whose interests have meanwhile shifted further towards Death and Black Metal. DEPRAVATION's second album sounds incomparably more aggressive and fierce than the Giessen-based band's previous releases - most recently a split with label mates ANCST.
Since is forming in late 2011, DEPRAVATION have played more than 300 concerts across Europe - meeting the musical needs of metal heads as well as the crust and hardcore punk audiences alike. Their never tiring DIY spirit helps the band spread their music across genre borders. And "III: ODOR MORTIS" is nothing different. The successor of "II:MALEDICTVM" (2013) has been recorded by and with Nikita Kamprad (Der Weg Einer Freiheit). What you hear are impetuous, unfiltered emotions and sudden brutality. But DEPRAVATION do not blast and shred alone. The musicians put just as much emphasis on striking grooves and eerie melodies.
"III: ODOR MORTIS" is both an extreme and multi-layered album, which hits musically violently and strives for relentless lyrics.