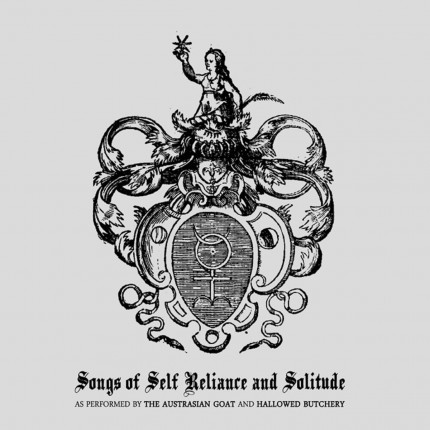 The USA-based progressive doom soloist Hallowed Butchery teams up with the French funeral doom soloist The Austrasian Goat for a monumental collaborative split 10" based upon the moral stance of self-reliance, popularized and preached by the Transcendentalist movement of the 19th-century. In a world of consumerism, conformity, religious-brainwashing, and political bullshit, these two musical geniuses refuse to merely follow the pack. This is reflected in both their lyrical content, and in their approach to their music, which is performed in solitude, and which often defies categorization. The Austrasian Goat begins the split with two songs of dark, minimalistic, funeral doom reminiscent of Ahab, Celestiial, and Nortt, but with an approach all his own. On the second of the two dirges, Ryan Fairfield of Hallowed Butchery makes a guest appearance. Side two features one epic song from Hallowed Butchery. His song is different from anything he has done in the past – reminiscent of Hawkwind-on-a-bad-acid-trip with Black Sabbath chugging cough syrup, while My Bloody Valentine snorts a mishmash of pills. The song features guest appearances from Julien Louvet of The Austrasian Goat and Brad Bolduc of Terrible Old Man. In a nutshell, "Songs of Self-Reliance and Solitude" is music for the forward-thinking, the individualist, the anarchist, the artist, and the metal-head in us all.