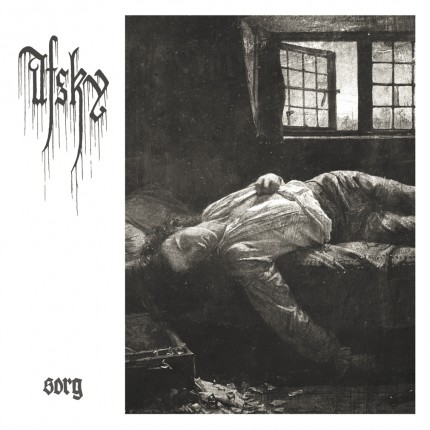 Related links to "Afsky - Sorg CD"
Description
Description
For those who may be new to Afsky, it is the solo project of Ole Luk, who is also a member of... more
Close menu

For those who may be new to Afsky, it is the solo project of Ole Luk, who is also a member of the Danish black metal band Solbrud. Fittingly, the name he chose for this project means “disgust” or “detest” in Danish, though as you’ll discover, the emotional resonance of the music embraces other powerful feelings as well

Unmistakably, the seven songs on Sorg plumb the dark waters of depressive black metal, yet Afsky does that in ways that often prove mesmerizing. The songs are built around evocative, memorable melodies that wear their strong emotions on their sleeves, some disturbing and some beautiful. The power ebbs and flows, and in the crescendos of intensity, Ole Luk uses his searing, acid-bathed voice to burn their messages into your brain like a red hot brand.
As we all know, there are different stages of grief. Sometimes it is a somber remorse, and sometimes it becomes indistinguishable from rage. Afsky moves throughout this range across Sorg.
And so, for example, the slow, strummed, reverberating chords that begin the opening track “Jeg bærer deres lig” seem melancholy in a wistful way, as if channeling a remembrance of something longed for rather than regretted. But the music begins to alternate, becoming much heavier and darker but also erupting in blasting torrents, the melody elevating like a flame.
The follow-on track, “Skær“, is a high-intensity experience right from the start, with an agonized guitar melody providing the prelude to a storm of thundering double-bass drums and boiling, tension-filled riffing. The music is deliriously wretched but also glorious in its desolation, the melodies rising and falling in waves like the wind-driven waters across a cold, black, pine-rimmed lake. Even in an interlude within the song, when a truly dismal, distorted solo guitar moans in agony, desolation reigns… but this song too proves to be mesmerizing.
And across the other five songs on the album, Afsky continues to bring to the fore changing experiences of loss, longing, cauterizing emotional pain, and beleaguered perseverance. The music can be slow and stately one moment, and rampantly ferocious the next, almost majestic in its bleakness in some passages, and completely unhinged in others. What doesn’t change is the intense feeling and engrossing appeal of the songs’ melodic cores, which integrate some folk and doom inspirations as well as the traditions of classic black metal.

Ole Luk has explained Afsky and its evolution in this way:
“Afsky was never meant to be a live band, more like an outlet for unused musical pieces, song lyrics and poems. I don’t like people telling me what to do, and how to do things, it kills all creativity. Afsky is the personal space where I can do what I like, which is also what makes the project very personal to me. It’s like I found the perfect place to combine my music,  craftsmanship, photography and so on, giving it all a higher purpose. That’s also the reason why I at first, didn’t care if it only stayed that way, without any live gigs. Some requests in Denmark finally made me put up a band”.
(No Clean Singing)