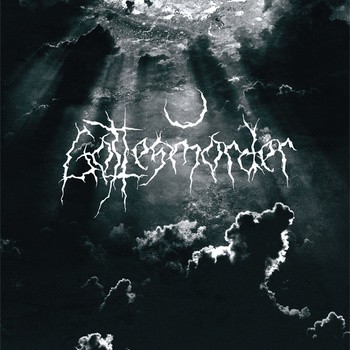 Related links to "Gottesmorder - s/t CD"
Description
Description
Gottesmorder have just dropped a new LP that is more than worthy of a review. Cvlt Nation did a... more
Close menu

Gottesmorder have just dropped a new LP that is more than worthy of a review. Cvlt Nation did a pretty good review on this recently, I recommend dropping by and checking them out, but only after you have thoroughly read my review, picked it apart, and moved on with life. Three gentlemen from Italy, putting forth a two song LP that clocks in just over 25 minutes. This music literally feels thick and heavy, but at no point does it ever sound muddied or "too much," if there is such a thing. These guys take Black Metal, Doom, and Post-Rock and slap it all together for one hell of a sound. I can see this being taken for a sludgy "Cascadian" Black Metal band, although, they're definitely a bit out of the actual Range to be considered that. Take Wolves in the Throne Room, easy example, give them a nature abortion, and shoot them up with some black tar, and you might have at least a mental image of what this will sound like. "Winternight,"the fourteen minute opening track casually guides us through the breadth of their music. Starting us off with a well placed pipe organ working its way through the background before being accompanied by harshly distorted guitars. The sound fades and at seven minutes, the moment you were waiting for with shit-yourself-anticipation, is finally revealed. Scathing, abrasive vocals and post-black/rock guitars penetrate the village of the ear farmers, likely bringing along with it a creepy skyline and soundtrack to the end of their lives. (see Battle Path review if that makes no sense) Track two, "Abyss of Throats," not only has an awesome title but is also an excellent continuation of the first 14 minutes that you didn't want to end. Clocking in at just over 11 minutes, this track picks up a lot quicker than its predecessor. About a minute in, we're already looking at what's in store for the next ten minutes, spaced out, atmospheric Post Black Doom. (stupid genre labels)