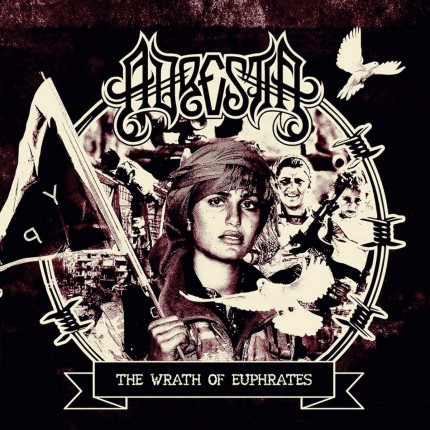 The year 2019 was overflowing with mammoth-sounding crust albums featuring dystopian visions intermeshed with bleak sociopolitical commentary. (See powerhouse releases from the likes of Agnosy, Swordwielder, Dödläge, Genogeist, and more.) Hulking Swedish crusties Adrestia stuck to their “no illusions, no utopias” formula on The Wrath of Euphrates, but the LP also honored those fighting for freedom on the frontlines at home and abroad.
Adrestia’s fist-raising d-beat, crust, and thickset Scandi death metal was the perfect iron-clad vehicle for channeling the band’s fierce political punk. Bulldozing riffs battered down the walls, while Adrestia attacked bigotry and environmental inaction, and highlighted real-world battles for autonomy and independence. There was nothing oblique or subtle about The Wrath of Euphrates. Tracks like “Punks for Rojava”, “Rise Up”, and “Fight Back” were all rousing calls to arms, with Adrestia hurling similarly incendiary missives throughout the LP.
No question, Adrestia are true heroes of the resistance. —Craig Hayes (Six Noises, In Crust We Trust Series)