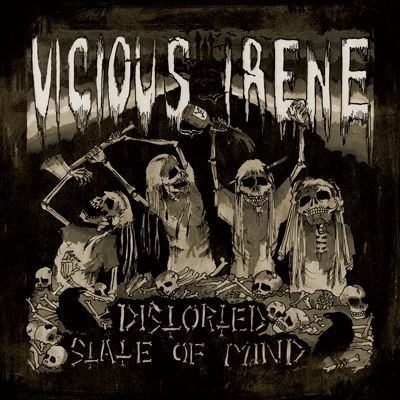 Die Schwedinnen aus Göteburg haben schon mehr als 10 Jahre und etliche Releases auf dem Buckel. Hier endlich das neue Album! ---> 10 years after their first full lenght "Pink Pollution" (which was followed by 4 further CDs & EPs), VICIOUS IRENE from Gothenburg, Sweden, are back with a brand new album! Within all these years of playing and writing songs together, VICIOUS IRENE has managed to create a style of individual Hardcore punk that melts together elements of classic Scandi D-Beat, Jap-Core and nineties Grunge/Punk, forming a stomping and massive beast of Grrrl Punk (all members are female). 10 new tracks that gives you an imagination of DISCHARGE meeting up with L7 or BIKINI KILL to discuss gender, feminism and authoritarian politics over a tea or booze bootle (you decide) not forgetting irony and humor... - The recording is a screaming steamroller of sheer and raw heavy noise and pounding drums. Comparsions to other bands probably don't judge VICIOUS IRENE in 2012, as they sound as unique and fresh as no other band i can think of at the moment. Great album!!!﻿