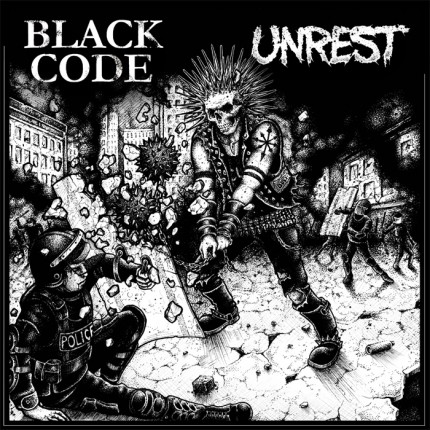 This time crust/grind worshiper UNREST from Munster, Germany have evolved greatly in terms of songwriting - even if only within their own previously set parameters. There's no left field experimentation here, just a better version of what they gave us 3 years ago on the "lake of misery" full-length. The 6 tracks are very tight balanced and the punching sound feels like a whole bag of slaps coming your way. UNREST still poach in the footsteps of classic Scandinavian bands like SKITSYSTEM and MARTYRDÖD as well as British grind pioneers EXTREME NOISE TERROR, but playing in a league of their own – unstoppable, unmistakable and relentless. BLACK CODE is a dark and heavy crust-metal outfit from Besancon, France. The secret behind BLACK CODE’s incredibly mauling sonic assault is the influence these guys bring in from various other forms of extreme music outside of hardcore-punk. If the foundation of their sound is surely rooted in Scandinavian crust, especially in the tank-like structures of bands like MARTYRDÖD and DISFEAR, these French certainly do not stop there. These 5 tracks takes one step deeper into the dark realm that BLACK CODE has created with heavy metallic, crunchy dual guitars, harshly growled vocals and pounding drums. Both bands destroy all your comforts and deliver one of the most powerful, dirtiest yet heaviest split records in a while. No filler, just riff after memorable heavy riff of indefatigable kegger crust-whatever. Colored vinyl comes with lyricsheet, black innersleeve and is traditionally packed in a crust-friendly black/white cover with awesome artwork.