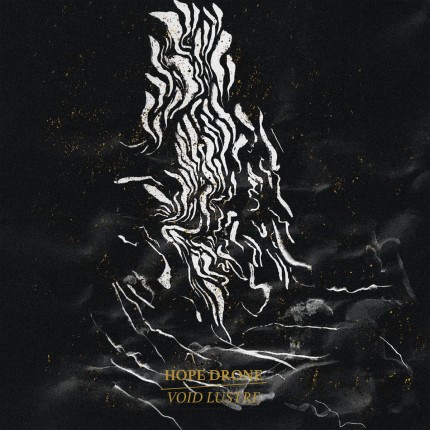 Related links to "Hope Drone - Void Lustre 2xLP"
Description
Description
Not from dark Norway, as you might expect from this kind of music (Blackmetal), but from sunny... more
Close menu

Not from dark Norway, as you might expect from this kind of music (Blackmetal), but from sunny Australia (Brisbane), the quartet HOPE DRONE makes its third album by now. In 2012 the band gave their first sign of life with the digital single „From Mimas To Phoebe“. The following year, the self-titled debut was released on OSCL (Australia) and MOMENT OF COLLAPSE. In their Australian homeland, the band played from now on as a solid support for Deathwish or Relapse bands. Consequently their second album „Cloak Of Ash“ (2015) was also released on RELAPSE. With this album, the band finally managed to establish themselves at the top of the league of modern post-black metal bands. For their third album „Void Lustre“, the quartet took a little more time. The fi ve songs consistently continue the band‘s path. Nothing is rushed here. Slowly and deliberately, atmosphere and tension build up and then end in a blastbeat thunderstorm. The sound is not strictly bound to (black metal) conventions and oscillates between ambient, post-rock, drone and post-hardcore and sludge elements. „Void Lustre“ is not a blind rage, but a thoroughly breathtaking and intense album. The nihilistic singing of CHRIS ROWDEN is accustomed to complaining and skillfully subordinates to the instrumental garment, so that there is never obtrusiveness. If you are looking for a related band, you will find them at DEAFHEAVEN and WOLVES IN THE THRONE ROOM, but ALTAR OF PLAGUES and DOWNFALL OF GAIA are also mentioned here.